After a strong gain in February, existing home sales, released by the National Association of Realtors, fell back in March despite lower interest rates and a strong labor market.

Total existing home sales, including single-family homes, townhomes, condominiums and co-ops, declined 4.9% to a seasonally adjusted annual rate of 5.21 million in March. On a year-over-year basis, sales were 5.4% lower than a year ago. Sales have declined on an annualized basis for more than a year.

The first-time buyer share increased to 33% in March from 32% last month and 30% a year ago. The March inventory increased to 1.68 million units from 1.63 million units in February, and rose from 1.64 million units compared to a year ago. At the current sales rate, the March unsold inventory represents a 3.9-month supply, up from a 3.6-month supply both last month and a year ago. While additional inventory will help the housing market, that inventory must be at price points that prospective buyers can afford, namely more affordable price tiers. This is the challenge the newly-built market faces as well.

The March all-cash sales shared 21% of transactions, down from 23% last month but up from 20% a year ago.

Regionally, all four major regions saw a decline in existing home sales in March, compared to the previous month and a year earlier. Sales in Northeast, Midwest, South and West fell by 2.9%, 7.9%, 3.4% and 6.0% respectively from last month.  On a year-over-year basis, sales declined in all regions, ranging from 1.5% in the Northeast to 10.7% in the West. Single-family construction for the Midwest and West are also down by notable amounts thus far in 2019. 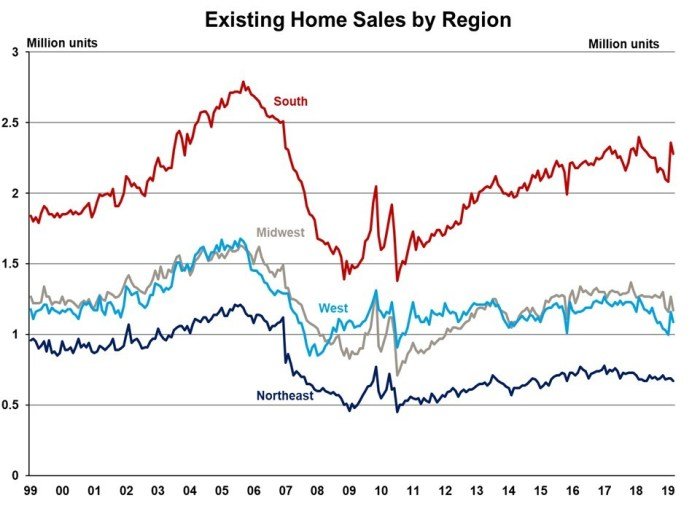 The NAR stated the retreat in existing home sales is not surprising. Given labor market strength, current sales activity is underperforming and favorable mortgage rates are not fully realized. NAR further suggested that tax policy may affect the housing market, especially the upper-end market, due to the limitation on deductions for home mortgage interest and property taxes. Meanwhile, after remaining unchanged for the past two months, builder confidence rose one point to 63 in April, indicating a solid demand for new single-family homes, but affordability is still a problem because of the labor shortage and costly building materials.