NAHB analysis of the most recent Quarterly Sales by Price and Financing published by the U.S. Census Bureau reveals that conventional loans accounted for 71.3% of new home sales in the first quarter of 2019, a 3.3-percentage point decrease from Q4 2018 (revised). The decline comes despite lower mortgage rates, continuing a post-2012 pattern in which higher average rates have been associated with increased market share. The 30-year fixed rate mortgage averaged 4.37% in the first quarter of 2019, down from 4.78% in Q4 2018.

Despite the lower conventional loan market share, Q1 2019 marked the eleventh consecutive quarter in which sales financed with conventional loans accounted for more than 71% of new home purchases.

Mortgages backed by the FHA backed mortgages made up 15.8% of the market, 3.1 percentage points higher than Q4 2018. As FHA market share increases, conventional loan market share generally falls and vice versa (see below). The share of new home sales financed with FHA-backed mortgages is just 1.4 percentage points below its most recent peak and the highest it has been since the second quarter of 2016. 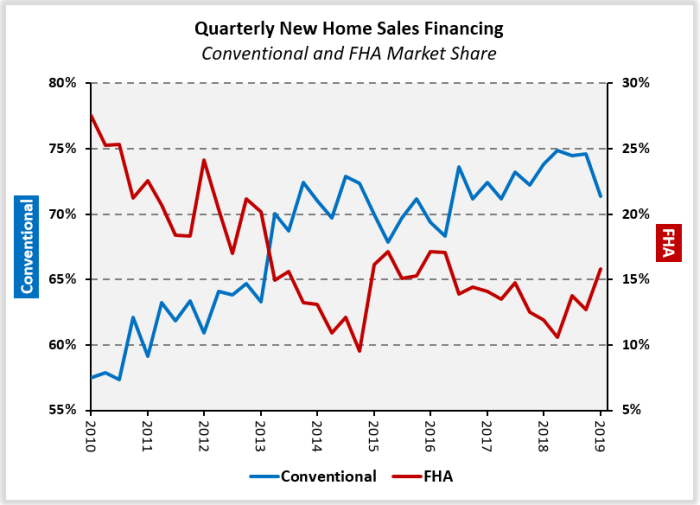 Cash purchases accounted for 8,000 new home purchases, representing 4.7% of the total which is the lowest share since 2010. The share of new home sales backed by VA products increased 1.6 percentage points to 7.6% of the total. 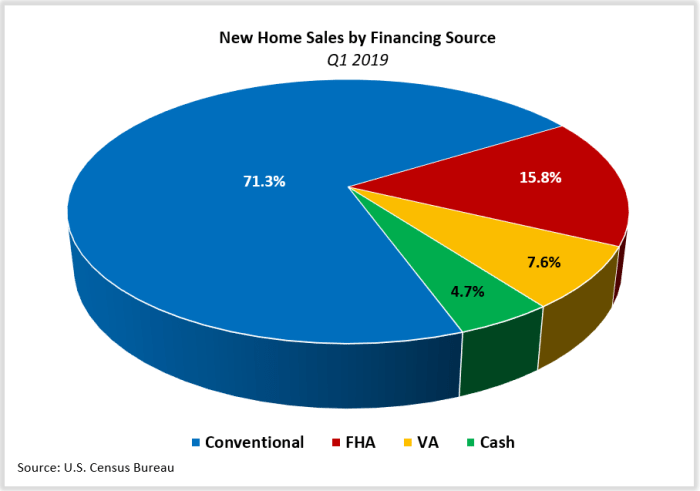 It is worth adopting some caution associated with the Census data as they are estimates based on sample statistics. The statistical error associated with the FHA, cash, and VA sales estimates from this data set are relatively high, meaning that although the data are presented as single numbers, the true values may be substantially different.

Mindful of these limitations, over the long run the current conventional loan share is 22.2% lower than its 91.7% high reached in 2006 and 5.3% higher than its average since the end of the Great Recession.

Different sources of financing also serve distinct market segments, which is revealed in part by the median new home price associated with each. In the fourth quarter, the national median sales price of a new home was $307,700. Split by types of financing, the median prices of new homes financed with conventional loans, FHA loans, VA loans, and cash were $343,100, $248,200, $328,600, and $315,400, respectively.